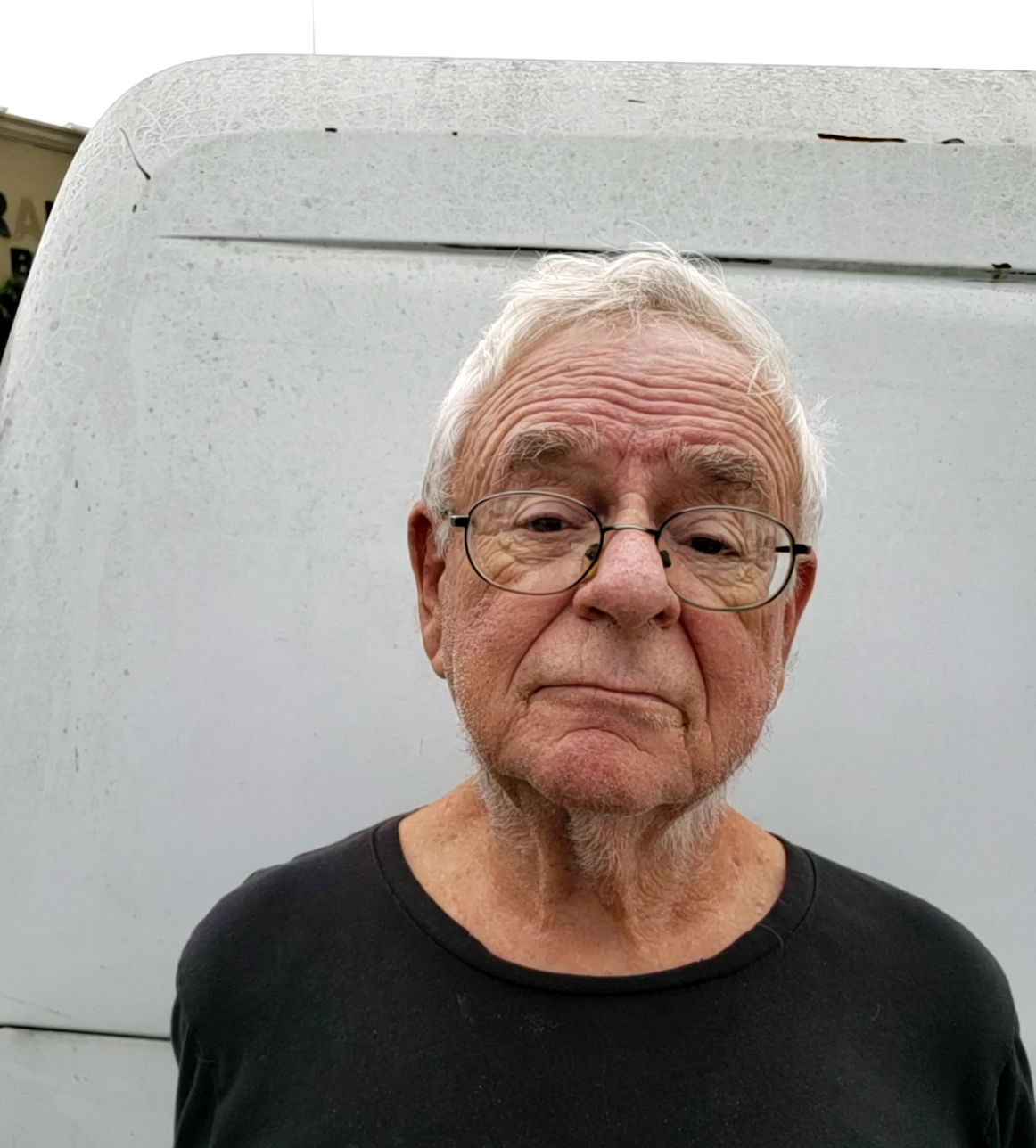 Robert Funt is a poet, but he has held jobs as a night watchman, factory worker, and office clerk. He attended the prestigious University of Iowa Writers Workshop and has a published collection of poems, Caldecott. Funt writes about the life of the American underclass and the unconscious mind. In this interview he discusses meditation, living as a failure, and the decline of poetry.

Charles Alaimo: What do you want people to know about you and your poetry?

Robert Funt: Wow. I don’t know. I have a big inferiority complex I’ve always struggled with. I have problems with poor self esteem. My employment record is actually a disaster; I’ve never been able to hold on to a job. So my upcoming collection Opusopuscule has quite a bit of material where I just can’t get over these feelings of failure. Being a loser, you know. I’m really hard on myself. But then there’s another side to the book; it’s about meditation. It’s about mysticism. It points to avenues where you can reach hope. I think you read a little of it, right?

Did you happen to read 41 Poems Without a Title? That’s all about my bad self esteem problems and hanging around with really disreputable outlaw kind of people. They were the only ones I felt comfortable with. But there’s a mixture of light and dark in the book too.

Tell me your thoughts on mysticism.

Mostly, I meditate. I have a very peculiar method of meditation. I’ve been doing it ever since 1994. I lie in bed with an old fashioned wind up alarm clock. If you know the show 60 Minutes on TV, the intro makes the same sound; four ticks to the second. I lie there, I listen to it. If my mind wanders away, I come back to the ticking. I keep listening.

Lately, I’ve been trying to meditate all the time: when I drive a car, waiting in line at the grocery store, even watching television. It is possible to meditate even while watching television. You might say, “What kind of meditation is that?” Well, meditation is when you’re not getting yourself all mixed up. When I lie in bed with a clock, I’m trying to suppress my thoughts. I don’t allow myself to think. I only concentrate on the tick, tick, tick, tick, tick. But the rest of the time, let’s say when I’m driving a car, if a thought occurs to me, I just try to dismiss it. And I don’t let it link up to the next thought.

That, to me, is the danger of thinking. You think, and a thought reminds you of something else, and then it links up with another thought, and another. You can keep doing that all day long. The whole thing is just this churning anxiety. I’m trying to break that habit. I try to do it all day long, and I fail, of course, but I keep trying. No thoughts in my mind. That’s the whole basis of meditation. My former self was so obsessed with failure and being a loser – I was constantly thinking all kinds of negative thoughts. I was obsessed with thinking.

Why, once in a while, when you do a lot of meditation, you might have a little, tiny moment of insight in there. Some kind of mystical truth pops into your system. Just very briefly. It hasn’t happened to me in years, but sometimes it can happen. But also, my poetry bounces out of the side of myself I struggled with. I see myself as a failure, a loser with a really horrific job record in the employment market. I also struggled with manic depression for many years. I had these really high highs and crazy lows. My depressions were really deep, really serious. It was hard to do the job assigned to me. That made life very difficult for decades. So now when I feel myself getting depressed, I lie in bed with a clock and I meditate fiercely, intensely, for an hour or two. Whatever it takes to get my mind out of that depression cycle. It has worked for me beautifully.

Has leading a tough life inspired your poetry? Do you believe in the idea of the starving artist?

I’ve lived below the poverty level most of my life. I’ve never had, you know, a really decent job. I’ve never really had much. I’ve got two wonderful sisters who have helped me out financially. So yeah, money. What do I do for a living? Almost 100% of modern poets teach English literature or creative writing in a university. That is how they make a living. But there’s a price to pay when you spend that much time in the academic world. There is an ivory tower syndrome. It’s a smeltery from the struggles of the capitalist world. There is a lack of passion in modern poetry, a lack of a sense of struggle. You don’t find radicals or renegades. Everything is homogenized.

So I haven’t done that. I tried teaching for a while, but my self esteem was so poor, I couldn’t even control a classroom. I briefly taught freshman English at the University of Miami. That was a total disaster. I never was part of that world. I did get a BA and MFA from the Writers Workshop in [The University of Iowa], which is really the top school for creative writing. And just about all my classmates from the Writers Workshop wound up as teachers. That’s what poets do. They teach in universities. That’s the system. I’m not part of that. I’m glad, because I can be more of a renegade and an oddball. I can worry about all these negatives in my life very bluntly. Frankly, I don’t think the academic poets would quite be comfortable with that. It doesn’t fit the mold of what’s expected of them.

I’m retired. I don’t really have much of a schedule. They say that when you’re retired, every day is the weekend. Lately, I’ve been getting the physical therapy. I don’t write every day. Sometimes years go by and I write nothing. Being a poet isn’t like being a fiction writer, where you have a schedule and you drag yourself to your writing desk every morning. It goes sporadically. But I’m always trying to write new materials or add to my collection Opusopuscule. I don’t know how I spend my day. I spend time in coffee shops, reading and sometimes writing. Right now I’m not high, I’m not low. I’m in the middle. I concentrate a lot on meditation and quiet throughout the day. That’s about it. Pretty boring.

What have you been reading recently?

There’s one book I’m always reading. I have it in my bathroom. Every time I go to the bathroom, I pick it up. I read a couple of pages and I’m never disappointed. I always find something new in it that I didn’t see before. It’s Under The Volcano by Malcolm Lowry. In the year 2000, a bunch of literary critics got together to make a list of the best novels of the 20th century, and he came in at number 11. It takes a little effort to get into it, but it’s very rewarding. You’ll learn a lot from it.

Tell me about the idea behind Opusopuscule.

Instead of putting the introduction to the book at the beginning, I wanted to let people get a little taste of it first. So the introduction is a small paragraph on page four. The origin of the book was word games. I was totally obsessed with writing palindromes and other kinds of word games. And I would type them up on a typewriter and collect them. Eventually I just started adding other stuff, too: thoughts, quotes, song lyrics, any kind of little scraps. It’s developed into hundreds and hundreds of pages, because I’ve been doing it for so many years. More recently, I’ve been distilling that raw material. It’s boiled down to 100 pages. Even so, I don’t consider it finished. I’m always thinking about what pieces I want to take out and put in. I wrote one a few days ago. It’s all in caps. It has two lines. It says,

I think that eventually it will find its way into the schools. I’m always looking for something new to put into that book. I’m never satisfied with it. I’ve tried to make a manuscript of it many times, but I didn’t like the result. Lately, though, I have a more sanguine feeling, a little more faith in it than I used to have. So I’m trying to get it published. I sent it out to four publishers at the beginning of the month.

Do you have any advice for writing poetry that sounds beautiful but also has meaning? Do you see a conflict between the two?

Well, I think that’s one of the central problems. You want the meaning of a poem to connect with the reader. But in another sense, you want it to be almost entertainment. A poem should be something that’s fun to read, it should be something like a song. You want all that sonic stuff to be in there. You want both. A poem is trying to write something which is musical, which is entertainment, but at the same time, you try to get a message across. That’s the trick, to try to combine those two things.

Poetry is very hard. It’s very hard to write a good poem. It’s a lot easier to write a story or something. What can I say? I consider it the highest form of writing. However, the price that has to be paid for that is the audience has completely disappeared. There are these whole worlds of academic poets who are “protected” by the universities from having a real audience. They get read by other poets and maybe a few literary critics. It wasn’t always that way. It’s like a tree that falls in the forest. You know, does poetry exist? No one reads it.